December 28, 2013
Weber - is a open souce weber framework for Elixir programming language. It's very lightweight and easy to deploy. Main goal of Weber to help developers to develop scalable web applications in the usual rails-like style. Weber is in eary development stage now, first commit was 07.09.2013, but now it has many features like: many features are in plans or in progress now like code reloading and etc...


I started Weber as a hobby project and main point for was - to make high performace web framework. There are many optimizations in weber in different places, more details you can find in the previous post. Weber's workflow is easy. Web server gets request from user and pass it to the handler. Handler tried to parse and match request url and execute any action which dependes on request: 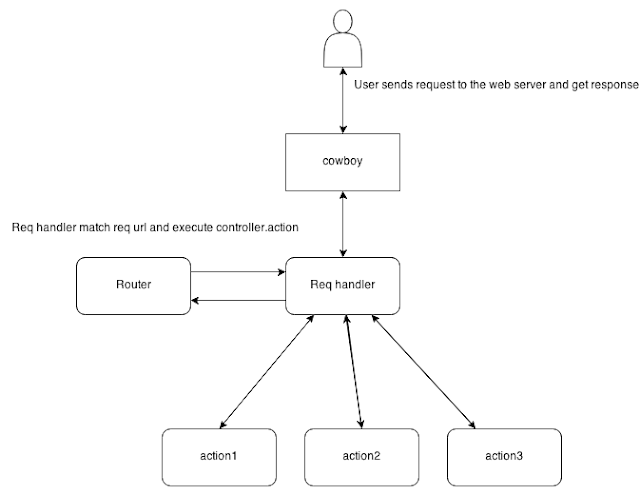 
All weber's routing configuration is in route.ex file. There is: route marcros in Weber. Main goal of router is to connect URLs with controllers and actions. You no need to declare route macros in your project for configuring routing. It's already predefined after new project creation. Example of routing configuration:


You can see here that weber's router consist from route macros and on/4 clauses. Every on/4 gets four parameters which means what to response for certain url. So if weber gets "/" request, it will call :SimpleTodo.Main.add, will get response of it and will return user. Weber router supports different features: Regular expression in path:


Weber use EEx templates. It's like HAML in rails:
There are many HTML EEx helpers in the Weber:


Weber has no opportunity to use/build data models, instead you can use Ecto library. Ecto is a domain specific language for writing queries and interacting with databases in Elixir. See examples.


As i said above i tried and trying now to make weber high perfomance. I found table of comparing json transfering, here is my table with the same test:


So... Weber is in eary development stage, but already has many features and good performance. It's easy to start to easy to develop. We're waiting your contribution. If you're Elixir guru or Elixir newbie we're waiting you in our irc channgel: #WeberMVC at freenode. If you will have any questions/suggestions or ideas for Weber, please let us know at irc channel or in issues.

Unknown said…
This blog is a great source of information that is very useful for me. Thank you very much for sharing this!
Software and web development company in lucknow

Unknown said…
It is the fact that the website CMS development has eased to maintain and manage our website content without paying any more to the developers and/or designers as earlier and you can easily make changes in your website personally as you need
web development
January 8, 2014 at 10:08 PM

Introduction There are many developers between us. We write a tons of code every day. Sometime, it is even not a bad code :) Every of us can easily write the simplest code like this: Every of us can understand what's this C code does. But... How this code works at low level? I think that not all of us can answer on this question, and me too. I thought that i can write code on high level programming languages like Haskell, Erlang, Go and etc..., but i absolutely don't know how it works at low level, after compilation. So I decided to take a few deep steps down, to assembly, and to describe my learning way about this. Hope it will be interesting, not only for me. Something about 5 - 6 years ago I already used assembly for writing simple programs, it was in university and i used Turbo assembly and DOS operating system. Now I use Linux-x86-64 operating system. Yes, must be big difference between Linux 64 bit and DOS 16 bit. So let's start.

Say hello to x64 Assembly [part 2] Some days ago I wrote the first blog post - introduction to x64 assembly - Say hello to x64 Assembly [part 1] which to my surprise caused great interest: It motivates me even more to describe my way of learning. During this days I got many feedback from different people. There were many grateful words, but what is more important for me, there were many advices and adequate critics. Especially I want to say thank you words for great feedback to: Fiennes Grienders nkurz And all who took a part in discussion at Reddit and Hacker News. There were many opinions, that first part was a not very clear for absolute beginner, that's why i decided to write more informative posts. So, let's start with second part of Say hello to x64 assembly .

Stack Some time ago i started to write a series of posts about assembly x64 programming. It is third part and it will be about stack. The stack is special region in memory (built into the CPU), which operates on the principle lifo (Last Input, First Output).